Tonight one of the worlds most intense directors has a premiere of his new film.

The film is called ENTER THE VOID and it is Gasper Noes latest head trip.

If he hype for this film is even half true, its gonna be an insane ride.

I highly recommend you go see it this weekend.  This is what cinema is designed for.

Its playing at the NUART theater in Los Angeles.

Be warned: Gasper Noe sucks you into his world and does not let you out until years later. 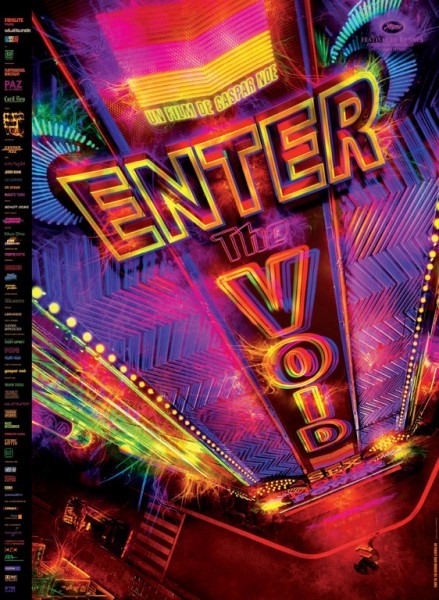 Here is another trailer followed by the opening titles.

If you haven't seen any of Gasper's films you are in for a real shock, that you will not forget for many years.  His films are the intersection of heaven and hell.  His last film IRREVERSIBLE is so haunting I still think about it.  He has a twisted sense of mixing violence, sex and spirituality in the most interesting ways.  IRREVERSIBLE is out on DVD and will be a great follow up to seeing ENTER THE VOID.  The entire movie is done with 8 or 9 long takes and is a brutal story of revenge told backward.  So you start with the last sequence of the movie, then go back in time to the previous sequence and play through that and so on.  The film is completely terrifying and the end, which is really the beginning is a shocker, but you don't know how much of a shocker it is until near the end.  It made Monica Bellucci a star, her performance is not to be missed, tragic sad and scary as hell.

Here is the trailer for IRREVERSIBLE.

Here is another trailer for it.

Want to master Microsoft Excel and take your work-from-home job prospects to the next level? Jump-start your career with our Premium A-to-Z Microsoft Excel Training Bundle from the new Gadget Hacks Shop and get lifetime access to more than 40 hours of Basic to Advanced instruction on functions, formula, tools, and more.

Other worthwhile deals to check out:

Join the Next Reality AR Community

Get the latest in AR — delivered straight to your inbox.

Irreversible might be the most twisted and disgusting film i've seen. Unless your into 10 minute rape scenes...